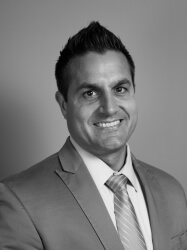 Born and raised in Dayton, Ohio, an adolescent Justin Weatherly was asked at the age of ten what he wanted to be when he grew up. His answer, "I want to be a lawyer." He then spent the remainder of his youth striving toward that goal. In high school Justin excelled in the subjects of history, reading comprehension and persuasive writing. Graduating from one of only a handful of nationally ranked public high schools in all of Ohio, Justin went on to attend the University of Dayton, where his father was a professor with a PhD in communications and taught the art of public speaking for over thirty years.

Born and raised in Dayton, Ohio, an adolescent Justin Weatherly was asked at the age of ten what he wanted to be when he grew up. His answer, "I want to be a lawyer." Justin went on to attend the University of Dayton, where he focused his studies on classes that would prepare him for his eventual goal of law school. Earning a degree in Political Science in 2001 with a minor in Philosophy, he made sure the subject matter in most of his classes revolved around Supreme Court decisions.

Justin's ambition earned him the honor of getting to be a part of the following programs during college:

Such attributes made him a highly sought after law school candidate, and after graduating college, Justin was accepted by one of only two top law schools in Ohio, the Case Western Reserve School of Law right here in Cleveland.

Becoming a Partner at the Firm

A couple of years after graduating with his Juris Doctor, he was approached by his friend and eventual partner, Brandon J. Henderson, Esq., who offered him a new opportunity. Originally working for Brandon, Justin took his experience and work ethic and applied it immediately to the rapidly expanding case load of the small firm. Together the two developed a reputation as formidable defense attorneys and civil litigators, succeeding at trial in more complicated and highly publicized cases. The firm was reestablished as a partnership in 2011 that is now Henderson, Mokhtari & Weatherly Co. L.P.A.

Attorney Weatherly is a fierce litigator, taking cases to trial that other attorneys have refused. He is believed to be the only attorney in the entire state of Ohio to convince a jury to acquit his client at trial of the charge of Criminal Non-Support, an offense thought to be indefensible. His reputation among his colleagues is so well established that he has been asked to lecture at seminars where the audience consists only of other attorneys hoping to gain from his knowledge and experience.

"I spent my whole life wanting to be an attorney. Now that I am, I couldn't imagine being anything else. I love my job. I look forwarding to building a personal relationship with my clients and guiding them through whatever turmoil in which they find themselves. I wake up every morning ready to go to work, and I am confident that I have the knowledge, determination and experience to accomplish the goals of all of my clients."

Our Top-Rated Attorneys Have Successfully Handled Thousands Of Criminal Cases